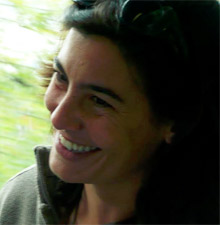 Ana has been a facilitator in numerous script development workshops organized by public film institutions in Latin America (Proimágenes in Colombia, the National Autonomous Film Center (CNAC) in Venezuela, the National Film Council (CONACINE) in Peru, the Dominican Republic Film Commission) and by the MEDIA/Creative Europe Program of the European Union in the United Kingdom, Germany, Greece, Finland, Romania, Norway and Spain. She is regularly invited as a lecturer and adviser by academic and film institutions, including the Fribourg International Film Festival, the Berlin International Film Festival—Berlinale, Saudi Creative Week, Fundación Carolina or the School of Filmmaking and Visual Communication of Catalonia (ESCAC), among others.

Ana has been a jury member for the awarding of script development grants by the Spanish and Colombian Ministries of Culture. She is the author of “Cuéntalo bien” — Common sense applied to stories, a key reference book for Spanish-speaking screenwriters. She holds a degree in Communications from the University of Navarra, Spain, and specialized in Screenwriting at the University of California-Los Angeles (UCLA).