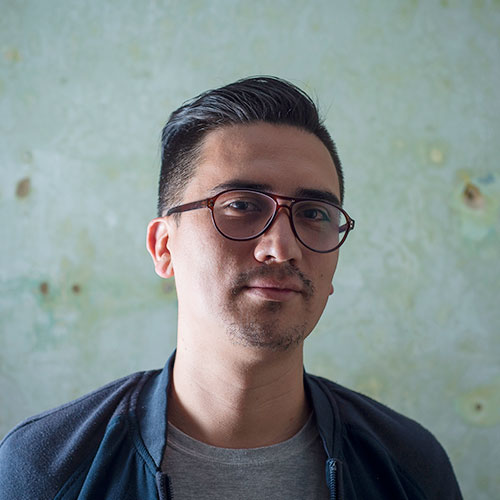 Andrés Ramírez Pulido is a Colombian screenwriter and director born in Bogotá. He has a B.A. in Filmmaking and an M.F.A. in Creative Writing from the National University of Colombia. His short film El Edén premiered at the Berlin Film Festival in 2016, was screened in more than 30 festivals and received awards at the Busan, Cairo, Biarritz, Tous Courts/Aix-en-Provence and Viña del Mar film festivals. His latest short film, Damiana, was part of the official competition at the Cannes Film Festival in 2017 and was screened in film festivals such as Toronto, Zinebi/Bilbao and Biarritz, where it won the jury prize. In 2017, he was part of the Berlinale Talents and the Lizières residence in France. Andrés co-founded Valiente Gracia, a company which has produced his latest films. He is currently developing his first feature film, La jauría, with the support of the Hubert Bals Fund of Rotterdam and a feature film production grant from the Colombian Film Development Fund (FDC).

Andrés is the recipient of the 2019 Cine Qua Non Lab-Bogotá Audiovisual Market (BAM) Prize, awarded by Cine Qua Non Lab in collaboration with BAM, the FDC and Proimágenes Colombia.

La jauría — Eliú, a teenage peasant, is serving a sentence in the middle of the jungle. The only thing that helps him break the monotony are his mother’s visits, but these stop when she is afflicted with severe cancer.