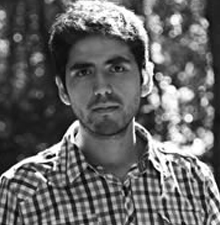 Diego Flores was born in Morelia, Mexico, and studied film directing at the Universidad del Cine in Buenos Aires, Argentina. In 2008 he directed his first short film, Los muebles no se van, which was screened at the 7th Morelia International Film Festival and the International Short Film Festival of Oberá, in Argentina. In 2010 he was the recipient of an artistic creation grant from the Secretariat of Culture of Michoacan/Mexican Council for Culture and the Arts (CONACULTA) which allowed him to direct his second short film, Bosquejos, which won the iSat special award at the 9th Morelia International Film Festival and the award for best short film of the Argentine short film TV show Ficciones cortas. In 2011 and 2012 he worked as a co-screenwriter and assistant director in the Argentine fiction series Inconsciente colectivo.