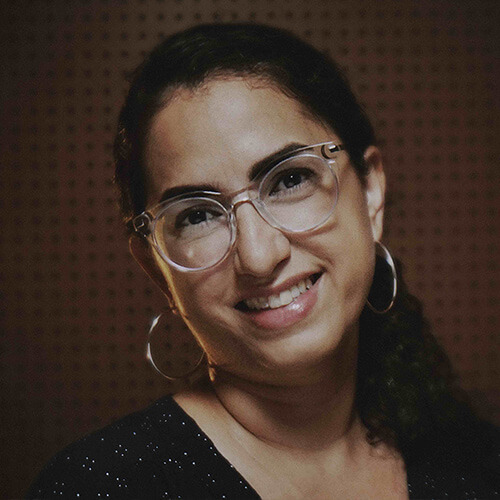 Gina Vélez Martínez, a native of Bayamón, Puerto Rico, is a graduate of the Department of History of the School of Humanities of the University of Puerto Rico. In 2005 she co-founded the production company Producciones Cabeza. Gina has participated in television programming development seminars, screenwriting seminars with mentors such as Guillermo Arriaga, children’s content production workshops with Nickelodeon, as well as production, creative production, scheduling, and soap opera and television pilot development workshops. As a producer, she has produced music videos, short films, feature films, advertising campaigns, television pilots, documentaries, events, animations and children’s programming. Gina is an educator in the areas of history, production, creative writing and screenwriting. In 2015, her work as a co-writer for the television series Incógnita was recognized with a Suncoast Emmy for best script. Her first feature film script produced,  Prótesis, is a dark comedy that has been positively received in Puerto Rico and is currently on the festival circuit.

A Dios que reparta suerte — When Latin America’s leading production company of infomercials goes bankrupt, the young publicist who inherited the company takes the unusual route of the faith business to keep his staff employed. What at first seems a quick fix to save his company, will turn into a personal war against his country’s political-religious mafia.