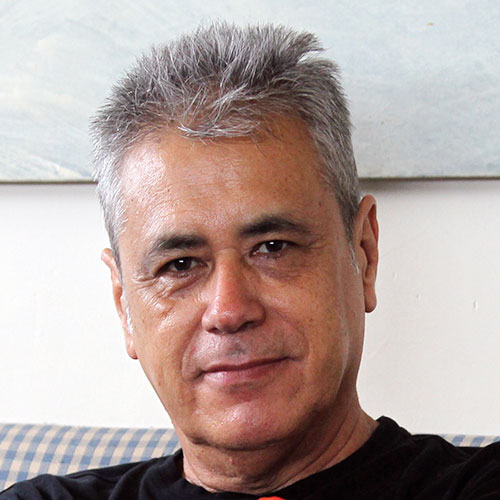 Senel Paz is a Cuban literary narrator, film scriptwriter and professor. His literary works include his short story book El niño aquel, winner of the David award from the Union of Writers and Artists of Cuba, as well as Un rey en el jardín and En el cielo con diamantes, both award-winning novels translated and published in several languages and countries. He has also written children’s books and plays.

His most internationally renowned literary work is the short story El lobo, el bosque y el hombre nuevo, winner of the Juan Rulfo International Short Story Award from Radio France International and the Mexican Institute of Culture and of the Critics’ Award in Cuba. That work was published in numerous languages and performed in more than 25 theatrical versions; it was also adapted into the film Strawberry and Chocolate, by Cuban directors Tomás Gutiérrez Alea and Juan Carlos Tabío, which was nominated for an Oscar® for best foreign film in 1995, among many other awards. In addition to Strawberry and Chocolate, other notable films written by Senel Paz include Cuban films Una novia para David, by Orlando Rojas, and Adorables mentiras, by Gerardo Chijona, and Spanish films Malena es un nombre de tango, by Gerardo Herrero, and Cosas que dejé en La Habana and Una rosa de Francia, by Manuel Gutiérrez Aragón, as well as the short films La fidelidad and El triángulo, by Rebeca Chávez.

Senel Paz is considered among the most outstanding film advisors and teachers in Latin America. He was the creator of the Young Filmmakers Festival of the Cuban Institute of Cinematographic Art and Industry (ICAIC) and founder of the Script Chair of the International School of Cinema and Television of San Antonio de los Baños, Cuba, where he first participated as a student and then as a guest professor in the workshops by Gabriel García Márquez. Senel Paz is a Professor of Merit at the Higher Institute of Arts of Cuba and lives in Havana.