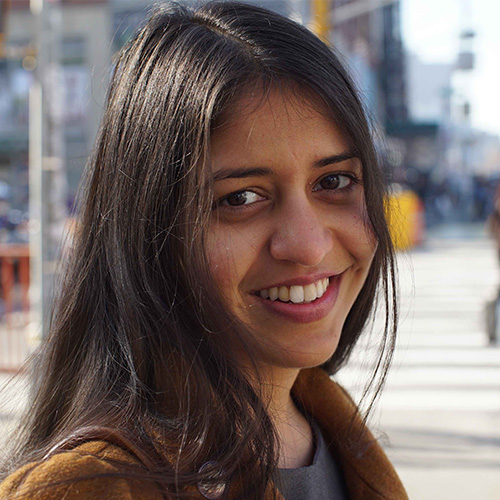 Shuchi Talati is a filmmaker whose work explores female sexuality, migration, identity and home. She has written and directed several short films, including Mae and Ash, which won numerous awards on the festival circuit. Shuchi is now collaborating with an all-woman team to develop her first feature, Girls Will Be Girls, a coming-of-age story set in a conservative boarding school in Mussoorie, India. She is also in pre-production for a new short film about period sex, A Period Piece, and she recently story-produced the first season of Wyatt Cenac’s Problem Areas for HBO. Shuchi has an M.F.A. in Film Directing from the American Film Institute Conservatory in Los Angeles, where she was awarded the Tichi Wilkerson Kassel—Women in Film endowment. Shuchi lives and works in New York City, where she is a member of Kalakars —a non-profit initiative to nurture South Asian artists in American film and television— and co-chair of the Brooklyn Filmmakers Collective.

Girls Will Be Girls — Mira, a model student at a conservative Indian boarding school, risks severe consequences when she enters into a relationship with a new student, Sri, and begins to explore her sexuality. When Mira’s mother, Anila, finds out about the relationship, she is at first an unlikely ally, but then, to Mira’s confusion, she begins to compete for Sri’s time, prioritizing her own needs over her daughter’s.